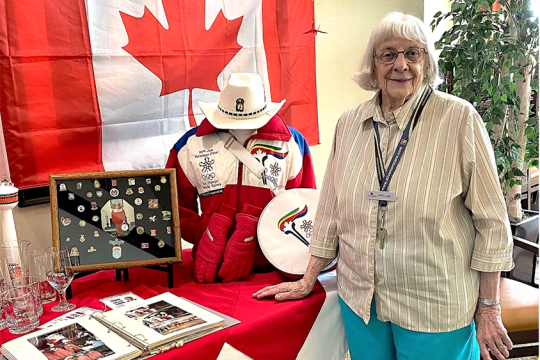 In 1986, Phyllis made a decision that changed the trajectory of her life and set her on the road to the 1988 Winter Olympics: she joined the Calgary Newcomers’ Club.

“We would meet at each others houses to listen to speakers. In ’86, a lady came to a meeting – it happened to be at my house – to tell us about the ’88 Olympics. When she finished, she asked whether anyone would volunteer, so I put my name down. And that was it!”, Phyllis laughs.

Little did Phyllis realize when she signed up, she had to undergo thorough RCMP scrutiny. Months later, after all the boxes had been checked, the married mother of a grown daughter was offered a job.  To join the team of chaperones to Hidy and Howdy, the official mascots of the XV Olympic Winter Games in Calgary, Alberta.

The next 2 years was a time full of adventure and emotion.

The Road to the Olympics

In 1986, Phyllis went on the road with the anthropomorphic twin polar bears who wore western style outfits.

Animated by students of Bishop Carroll High School, the first stops were local schools in Calgary. They then travelled to Penticton, Vancouver, and Ontario stopping at trade shows, fairs, and everything in between.

At 56 years old, the diminutive woman drove the motor home filled with costumes, supplies, and the mascots from location to location and from province to province.

“We didn’t know where we were going ahead of time”, says Phyllis, now 91.  “The locations were kept a secret. Even headquarters was secret. They were afraid that someone would get hold of a costume – espionage was a big concern at the time.”

Reminiscent of a 007 movie, officials were afraid that someone would use the costumes to gain access to secure areas or even hurt someone.  “It was still the Cold War, and we were dealing with mayors, politicians, and celebrities all the time. “We were given carte blanche, so it could be mayhem if the wrong person got hold of the costumes. We had to always have eyes on the costumes. Defection by the athletes was also a worry”, recalls Phyllis.

The Torch Run with Hidy and Howdy 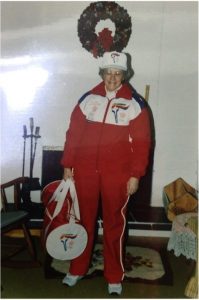 On Christmas, Phyllis flew to Toronto. Over the next 10 days, they followed the run to Niagara, Lake Erie, Simcoe, Windsor, up to London and back to Toronto.

A memorable event happened in London, Phyllis recounts, laughing: “The lady running in London was very pregnant.  I asked when she was due and she said, ‘Yesterday’.  We ordered an ambulance to follow her!  She ran her mile with that torch.  Well, the next morning her husband banged on the motor home window.  It’s a little girl!”

In Tilbury Ontario, Phyllis ran a mile with the torch.

The concentrated work happened during the Olympics, where there were 25 pairs of Hidy and Howdys to chaperon on their daily appearances.

She confides that she was in opening ceremonies. “We were involved in the performance, which was wonderful. Then for closing ceremonies, I could watch from the stands.”

“Funny enough, it was very emotional.  I had tears, I must say.  And I knew how hard everybody had worked to get to that point; to get to opening ceremonies. You see the athletes – how they train.  It was emotional. I was very pleased to be there.”

Ever unassuming, Phyllis continues to praise the bears.  “Once they were there, they were bears – Hidy and Howdy bears – and they did not speak. Which is something for a 17 or 18 year old!  Once they put the head on, it was all nodding or shaking the head.  Because bears…don’t… talk.”

To illustrate her point, Phyllis tells of an interview with Darrel Janz, “I met him at The Jubilee and he said, ‘This is the list of questions I’m going to ask them.’ And I said, ‘Well you realise they won’t answer you?  They’ll just nod or shake their head.’ Well, the poor man’s whole program was shot!”, she laughs. 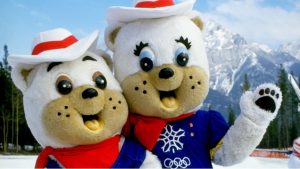 To celebrate to celebrate Canadian athletes participating in Tokyo at the Olympics, All Seniors Care held a National Event on July 20th.  Seniors in residences across the country participated in satellite events, including their very own torch run, golf, basketball, and outdoor entertainment.

Currently a resident at Auburn Heights Retirement Residence, Phyllis was asked to create a display to showcase her experience.

“I was floored.  I didn’t think that anyone would really remember. But I don’t think that there’s anybody who hasn’t stopped to look at the display, or come to ask me questions about something on the display!”

A caregiver to her husband, Sid, through the Covid-19 pandemic, Phyllis is grateful to the staff at the Calgary assisted living community. Having been transferred to long term care, Phyllis misses her husband of 71 years who was a supportive co-conspirator in her adventures.  “It was our 71st wedding anniversary yesterday.  The staff have been very wonderful and helpful.  There’s seems to be an open-door policy and there’s always someone to talk to.”

To find out more about Camp or learn more about our Quebec residences and residences across Canada, just give us a call. Find out what all the fuss is about. 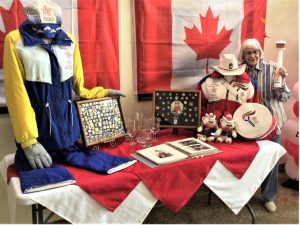