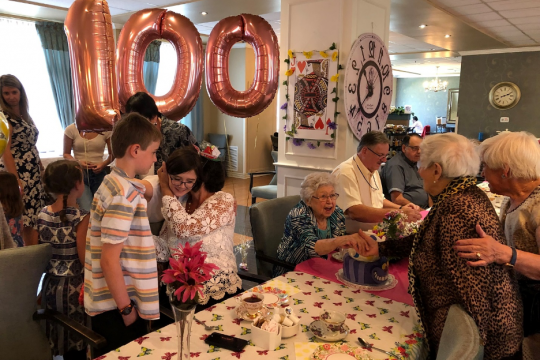 These vague directives are often framed as the necessary ingredients in a long and healthy life. While these day-to-day habits definitely work in concert to keep people healthy, a person’s approach to life — including, and maybe especially, the way they react to hardship — may be just as important.

This month, All Seniors Care decided to consult the experts on reaching a ripe old age – those who have already done it.

Sigurd, who grew up on a cattle farm in rural Edmonton, has never really been sick in his life.  He celebrated his 102nd birthday this past July at the St. Albert Retirement Residence with a visit from his family.

Scoffing at the idea of a low fat, gluten free diet, he credits his good health to eating simply.  A gardener for much of his life, Sigurd grew “mostly useful things”, eating from his garden as often as possible, though he “ate whatever was put on the table”.

While Sigurd stayed active by riding plough horses when not working, a sassy lady who turned 100 at Shaftesbury Park Retirement Residence in Winnipeg, Manitoba says that the key to staying youthful is to be “busy, busy, busy!”

Born in Mosbank, Saskatchewan, Helen was a student at the University of Manitoba studying Home Economics when World War II broke out.  “Despite thinking it was terrible, I don’t think we realised the significance of it or how bad it was. We were living our lives and doing everything that was normal for us – dancing, dating…”

Helen eventually married and had 4 children.  Throughout her married life and beyond, they stayed active by playing golf and tennis.

Today, she participates in the many exercise groups offered at Shaftesbury Park.

Research tells us that being socially engaged has dementia-lowering and age-preserving qualities.  Do our centenarians agree?

Absolutely.  Bridge with friends, staying in touch with family, and being active in the community have contributed to positive feelings throughout Helen’s life.  She goes further, saying, “That’s my secret: you have to keep busy…the days go by quickly.  You need [to be social]; we need it for our well-being.”

An avid traveller throughout her life, Helen moved to Shaftesbury Park 8 years ago, when she could no longer drive or travel independently.  She chose it because she had good friends already living there. Having a large group of friends at the residence also helped her adjust quickly.  They played bridge, exercised, walked, and stayed involved socially.

“My friends were happy here, so I took the trip, too”, she quipped. 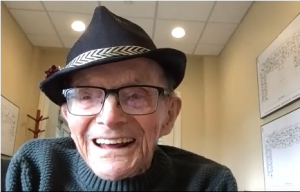 Have a Positive Outlook

“Take life as it comes”, says Sigurd. “I think that’s the happiest way.  Don’t try to always change things, or do different things”.

Indeed, research has found that people with a positive outlook while they are young have a greater chance of living longer. That’s because adjusting your opinion on aging while you’re still young can build a positive perspective that may have a tremendous effect on your life expectancy.

Helen believes in a positive outlook and experiencing life fully. “You have to learn from experiences,…so don’t put things off.  Do them while you can and enjoy life. I try to teach those lessons to my grandchildren.”

Be Resilient and Adaptable to Change

Or, as Sigurd puts it, “Roll with the punches”.

“I was never one of those guys that would make a big fuss about what’s what.  It’s good to be easy going.  I like to be gentle and kind.”

Positive thinking makes people more resilient to illness and more proactive about health. Those with a positive outlook are also likely to experience less stress, reducing their likelihood of developing chronic diseases or disorders.

Helen tells us, “It’s amazing.  I’ve been through a lot of changes in the world.  It’s nice to see them all.”

Despite being disappointed at missing the celebrations that her family had planned for her 100th birthday (many now live in Ontario, but all had planned on joining her in Alberta for the big day), Helen remains positive.

The staff at the residence made a “beautiful birthday party and I really appreciate it. It was the next best thing because my kids couldn’t be here”.

On the Covid-19 Pandemic

Both Sigurd and Helen praised the All Seniors Care staff and management.

“They’ve done a wonderful job of protecting us”.  Helen said.  “Thankfully, nobody has been sick.  They’ve been very careful about letting people in and out.  I’m getting used to it, but am preparing for a long battle, I’m afraid.”

True to his easy going personality, Sigurd says that he’s seen a lot of amazing things in his lifetime and this is just another thing to get through.  “You see these things, but don’t keep thinking about them.”

He’s learning new technology so that he can keep in touch with family members who don’t live close enough to visit, including Facetiming with his daughter.

He’s “followed a good life. A healthy and happy life”.  So good, in fact, that he “wouldn’t mind living it twice.”

The secret? “To just be happy.  Absolutely.”

“Whatever comes alone, I just know I’m gonna like it”, he says with a grin. 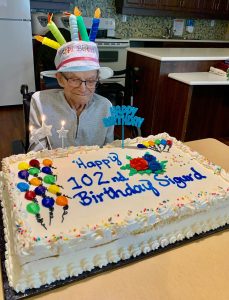