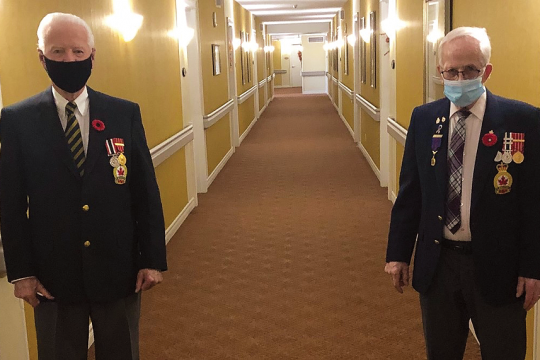 Each year on 11 November, we mark the date in 1918 when the guns of the Western Front fell silent after four years of continuous warfare. It was the end of the First World War.

On Remembrance Day 2020 – this year we mark the 75th anniversary of the end of the Second World War – we honour, recognize, and remember all veterans: those who have fallen, living veterans, and members of the armed forces currently in service. We also acknowledge the sacrifice made by families on the home front.

The Act of Remembrance

The Covid-19 gathering restrictions have resulted in significantly smaller ceremonies across the country, as well as some outright cancellations.   For the first time, people are asked not to attend ceremonies in person. Fortunately, there are still many ways to show respect:

Here at All Seniors Care, we are proud of our veterans. Since many of our retirement communities are offering modified ceremonies this year as a safety measure, we decided to share some stories and videos with you.

Honouring Veterans with Their Stories:

As a boy growing up in the Gaspé region during the 1940s, Mr. Gallant remembers the effect that the war had on his uncles after they returned from active duty.  Though they rarely spoke of their experiences, the impression they made on him was lasting – as soon as he was able, Mr. Gallant joined the Canadian Forces.  He was immediately posted to the Royal 22nd Regiment at CFB Lars in Germany. He remained with this French Canadian battalion for 15 years, before an accident ended his service.

Valued for his language skills (he speaks French, English, and German), Mr. Gallant would return to Germany as a civilian in the armed forces for another 17 years. He served as a VIP aid during the Cold War.

While stationed in Germany, Mr. Gallant helped to establish the Royal Canadian Legions at Lahr and Bergen.  To this day, the branch at Lahr remains operational.

A resident at River Ridge 1, Mr. W. is 102 years old; he was called up for service at the youthful age of 20 years old. The year was 1938, six months before the start of WW2. One of the remaining survivors of the Battle of Britain – which marks its 80th anniversary this year – Mr. W. wanted to tell his story using modern technology!  We hope that you enjoy hearing about his incredible experiences.

Mr. John C served as a Master Warrant Officer for 35 years. He was posted across Canada, England, the Middle East, Egypt, and did an Artic Tour. Now a resident at Beacon Heights, the 88 year old veteran asked that we share a poem he wrote in honour of his fallen comrades.

Mr. Seaward Higdon was a Captain who served in France, Alert (Nunavut), Halifax, BC, Montreal and Ottawa over his 26-year career. Mr. Higdon shared a poem with us for Remembrance Day. To watch him recite it, click here. 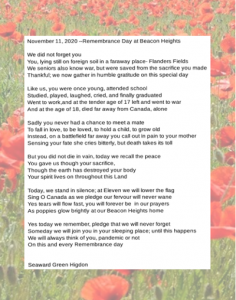 Honour Them after Remembrance Day:

Remembrance Day isn’t the only time that you can show thanks to veterans. You can do so at any time of the year. The winter holidays are a perfect opportunity to write cards and letters to veterans giving them thanks and wishing them well. You could become a long-time pen pal. Here are some videos to inspire you about what questions to ask that will put smiles on their faces and get them to write back right away.

You could also send holiday cards to the armed forces who are in service right now. A brief message could lift their spirits.

Special Occasions at All Seniors Care:

Here at All Seniors Care, we put the effort in to acknowledge special occasions, including Remembrance Day. We do this to create a supportive, respectful and engaging environment for our residents. If you’re interested in joining our care homes, you should click here to take a look at the All Seniors Care communities that we have across the country. 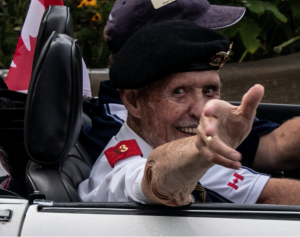